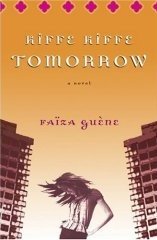 The book I'm currently looking forward to buying is a book that was wildly popular when it was first published in France in 2004, selling well over 70,000 copies.

Originally published in French, Kiffe Kiffe Demaine by Faïza Guène is about a 15-year-old Muslim girl raised by her Algerian immigrant parents. Poor, they live in a ghetto on the outskirts of Paris. The novel touches upon themes such as cultural diversion and conservativeness as well as criticising the social systems in place.