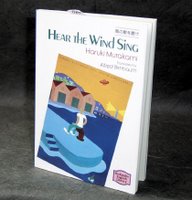 They say you're too much of a crazed Haruki Murakami fan when you order from Japan his first novel, Hear the Wind Sing. I guess now you can count me in as one of those crazed fans... I just got my copy yesterday.

It's a very small book, measuring only 4.25" x 5.75". This spoils my Murakami collection a bit though - I collect the UK editions - but I don't care! It looks so cute! How typical of those Japanese! Have you seen the new Picador Shots! books? It's as small as a Shots! book. But instead of costing RM7, this one costs RM50...

Hear the Wind Sing and Pinball, 1973 are the only two novels by Murakami that haven't made it into the West. Though translated by Alfred Birnbaum and published by Kodansha for Japanese students studying English, Murakami has stated that these two early efforts by him were weak and not fit to be republished.

And while the English translation of Hear the Wind Sing continues to be reissued in Japan, Pinball, 1973 hasn't and most likely won't be any time soon. This has resulted in any available copy being sold for up to US$500 by people taking advantage of its rarity. That's just crazy... especially when you can find a PDF of the book floating around on the net.

My solution to the Pinball problem - though highly unethical and undoubtedly illegal - has been to take the PDF, reformat the text, and print it into a book using Lulu. Problem solved.

I'm planning on marathoning through the whole Murakami "pantheon" that's available in English, which is why I've been making all this effort. I had planned earlier to start chronologically from A Wild Sheep Chase, Murakami's earliest novel published in English, but as it was the sequel to Pinball, 1973 and Hear the Wind Sing, I felt that reading it first would lack some context.

I might start my Murakami Marathon in December after the chaos of NaNoWriMo has settled down. Can't wait.

(For a review of Hear the Wind Sing, click here.)