December 20, 2006
Haruki Murakami's been in the news a lot lately. He's got a new translation of Fitzgerald's Great Gatsby out in Japan apparently so maybe that's why he's getting all the attention lately.

The Japanese daily, Yomiuri Shimbun, interviewed him recently, and Murakami claimed that his encounter with The Great Gatsby was "fate":

We meet a lot of people in our lives, and there are fateful encounters among them. Such encounters can sometimes change your life completely.

Such encounters can often open up new doors and close others. You sometimes feel your whole being has completely changed from how it was beforehand.

My encounter with The Great Gatsby was of that nature.

Also in the Yomiuri Shimbun, but a few days back, is an article about a symposium held in Japan discussing Murakami's impact on Asia, specifically in countries like South Korea and China.

What piqued my interest was how Murakami managed to write something that appealed to these people, considering their nations's historic enmity towards each other: 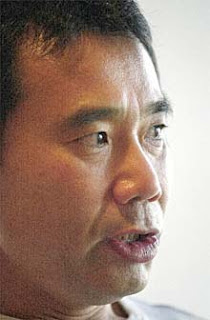 In South Korea, which for many years after World War II had a military-controlled government, literature traditionally functioned as the "discharge channel of politics." Because of the situation, it was difficult for Japanese literature focusing on personal psychology or daily life to win wide support in the country. This was the case even for works by Yasunari Kawabata and Yukio Mishima.

But the Korean translation of Murakami's Norwegian Wood, which was published in 1989 with a title meaning "The Age of Deprivation," was a hit.

Kim Choon Mie, a professor at Korea University who has translated Murakami's works, including Kafka on the Shore, said: "The Haruki literature depicting the sense of defeat and loss held by those involved in the student movements of the 1960s and the internal conflict suffered by young people in Japan during the change to the later stage of capitalism have accurately expressed the sense of apathy and emptiness held by young South Koreans who played a pivotal role in the change of government to democratic rule in the 1990s."

It also makes me wonder why his writings have never really caught on in the same massive way in Malaysia. I'd make a guess that it's due to a lack of translation and a lack of the love ofreading in general.

The Asian countries where Murakami has found success tend to have a large percentage of people in their population that actually love to read, while Malaysia... well, I guess we're just a country who loves to keep telling ourselves to cultivate a love for reading then stopping there.

Meanwhile, on the other side of the Pacific, Emily Parker of the Wall Street Journal asks, who will tell the story of Japan?

Not me, says Murakami:

Themes of history and memory clearly run through Mr. Murakami's books. Yet he seems loath to analyze his own work for political messages or historical lessons, saying that he just wants to "write a story." But if Mr. Murakami feels so strongly about facing the past, and so concerned about the future of his nation, why doesn't he address these issues more explicitly in his writing, using his prose to shake Japan out of its historical amnesia? The novelist answers that sending overt political messages is simply not the job of a fiction writer.

That's not to say that Mr. Murakami's colorful prose doesn't address serious issues. It just does so in an indirect way--which, in Mr. Murakami's view, may be even more effective. "If you say, 'I'm very sad, my dog died,' it's a message--a statement. Nobody sympathizes with you," he explains. "In that case, you have to change your statement into another kind of story. When you're sad, when you lost your dog, you should not write about your dog. You should write about another thing. If you write about the dog, it's an essay, not fiction."

Funny he should invoke a death of a dog as an example. I would have thought he'd go with cats.

Meanwhile, I still have a copy of The Great Gatsby that's missing the first 18 pages. Sigh.