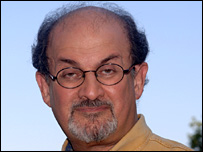 Salman Rushdie, one of my favourite writers gets a long-deserved knighthood. The Guardian has a few choice quotes from the literary scene:

"I am delighted for him," said fellow novelist Ian McEwan said last night. "He's a wonderful writer, and this sends a firm message to the book-burners and their appeasers."

The book-burners got the message all right and they don't like it much. Fatwa-spouting Iran has already condemned Sir Salman's knighthood:

"Giving a medal to someone who is among the most detested figures in the Islamic community is... a blatant example of the anti-Islamism of senior British officials," Mr Hosseini [Iran's Foreign Ministry spokesman] told a press conference.

"The measure that has taken place for paying tribute to this apostate and detested figure will definitely put British statesmen and officials at odds with Islamic societies, the emotions and sentiments of which have again been provoked."