"Always the tone of surprise."

July 23, 2007
Probably my favourite quote from Harry Potter and the Deathly Hallows! But I think Ron said it already in previous books? I forget.

I've just only finished reading it... and I thank J.K. Rowling that my faith in her all these 8 years was not in vain. Thank you for such a satisfying ending.

All these years, I've faced Harry Potter launch days with both longing and trepidation. Longing because, well, the obvious. Trepidation, not because of who might die, but who might spoil the book for me. Let's get this straight. I HATE SPOILERS. It doesn't matter if the book or movie doesn't really hold much interest in me, I just hate knowing something I shouldn't be knowing until I see or read the story myself. That's just me. Other people won't mind of course.

For me, it's the thrill of enjoying the story, the hows and the whys. I enjoy finding out for myself both the means and the ends if the story, the cause and the effect, without finding out from an external source. This is why I engage in a Harry Potter non-stop sprint to the end every time a new book comes out. I don't even like this horrible rushing through a book, I prefer taking my time, chewing each tasty morsel, savouring every word. But I always do the mad rush in the case of Harry Potter because I'm always scared that some moron in the newspaper, internet or in the office, heck, even on the street or LRT, might spoil something, however minor, for me. This is even more important to me, because I've been waiting for the ending( and the minor details that lead to that end) for a goddammed eight frickin' years, and no way I'm finding out but from the book itself.

Two types of people annoy me in this situation: the rabid Harry Potter maniac, and the constant basher. The first because they are unbelievably pedantic and would discuss spoilers in a public forum without due warning; and the latter, because all they want to do is bash Harry Potter non-stop, citing that Neil Gaiman/Robin Hobb/Philip Pullman/Lemony Snicket/etc. is better.

To the latter: Dude. It's a personal opinion. There is no "better" series or author. Just enjoy what you like, convert other people into believers of your cause if you want to, but man, don't diss what other people like.

To the former: Screw you. It's people like you who create people like the basher. You fawn over Harry Potter like it's The Greatest Ever, and when newbies to the series realise it's not as great as you made it out to be thanks to you hyping it so much, they go blind to the good parts and annoy everyone about how everything else is soooo much better.

Okay, rant over. Actually, all I wanted to say was I liked the book. A lot! 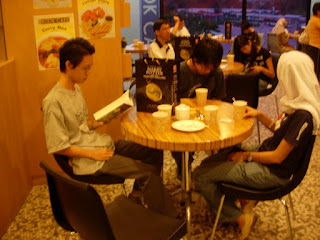 Me, my brother, and L in MPH 1U at 7am, surrounded by an almost non-existent crowd. Kino and Borders? Fools!