August 06, 2007
We went to the Payless Warehouse Sale at the 3K Inn on Saturday. There were many books, as is usual with Payless's sales, but this time I found the selection wanting. The books were the same old books we've already seen and bought in previous warehouse sales. I decided to concentrate on finding books of genres that I had not bought before at a Payless sale.

I came out with two Dashiell Hammets, one Louis L'amour (don't ask), a book of writings by Marx and Engel (because I'm a closet socialist), and two classic sf books, Starburst by Frederick Pohl, and The Difference Engine by William Gibson and Bruce Sterling (probably the third time I bought this oft-lost book). I also "accidentally" bought two sf novels which I have absolutely no idea how it got into my book pile. I only noticed them after the guy at the counter had already scanned them in, and by then it was too late to cancel (without making a big fuss). The big downer is that both the sf books are clearly targeted for girls, since the covers are drawn in that awfully gaudy Harlequin-type cover art. Yeesh.

Lesson in buying at a Payless Warehouse Sale:
Check your wares before checking out.

I also stopped by the 1Utama branch of MPH to redeem my RM15 worth of book vouchers they gave to people who pre-ordered Harry Potter and the Deathly Hallows. Turns out they had some sort of Merdeka sale where every book had a 15% discount. I ended up buying Tobias Buckell's Crystal Rain for a mere RM15 even though it was worth more than twice that! Yay! 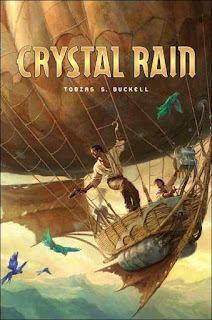 I chose to buy Crystal Rain because I had read the opening chapters which are available for free downloading at Mr Buckell's very neat website, and I found the concept of the book intriguing (even though the cover is completely, utterly crap). A steampunk setting with a Caribbean-inspired culture--obviously not your run-of-the-mill fantasy! I look forward to devouring it quite soon. There's already a sequel, Ragamuffin, but I'll get to that if I like this one.

Oh, and me and L also bought a pearl jade Perodua Viva on Saturday. It's the model with all the tricked out stuff like ABS, airbags, electronically-controlled side mirrors, machine guns, passenger-side ejector seat (in case Goldfinger's goonies got in), kitchen sink, etc. We thought maybe all those nifty tech would come in handy in a tight situation. Maybe.

True to its marketing campaign, it does bring out a lot of love. It sure is one enjoyable little car to drive. L was asking me what name we could give to it, since my Volkswagen Beetle is called George, and it was the obvious conclusion that the Viva would have a name as well. I didn't know what to call it. I told L that it wasn't up to us to give names to our cars, we had to wait until our cars told us their names. If a car had a personality, it would reveal its name soon enough. 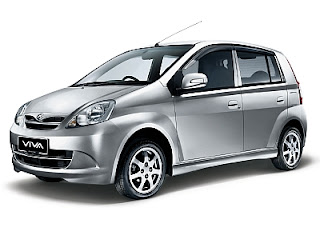 And that's what happened with George and Dorothy (my mother's car, also a Volkswagen Beetle). They just revealed their names to us, out of the blue. It hasn't happened yet with the Viva, but L made a joke about us not knowing the Viva's name, saying it's probably secretly named Rumpelstiltskin. Unfortunately, the Viva has started becoming dangerously attached to that name... Maybe we shouldn't have talked about that in front of it? In any case, L hates that name, so no way we're calling our Viva that.

And such was the story of my weekend.