January 24, 2008
A bit late on this, I know, but crazy things have been happening in my life lately, and it didn't just include my honourable prime minister announcing another day of holiday especially for me. Wow! He must've known how tired and ragged I've been feeling!

So! Last Saturday, RA Fine Arts Gallery held a spoken word event of their own, called "Kata-Suara", which is a neat riff on "spoken word". 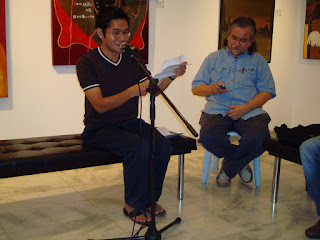 First to read was Fazli Ibrahim, who read a travelogue of his which was published in a 2006 anthology of writing, KataHati. 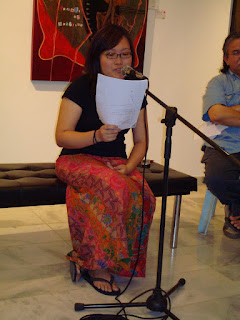 Then Pat Low took the mic and read a poem, as well as a monologue, The Tallest Durian Tower in the World (or something like that, I didn't take any notes). But if you've heard her read at Seksan's, you've heard the monologue before. But previous knowledge of the monologue did not hurt my enjoyability of it; I still found it funny and meaningful. 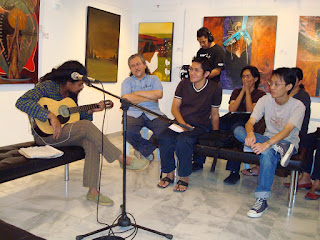 Next up was poet extraordinaire, Rahmat Haron, who proceeded to surprise the audience with his singing of his poetry. 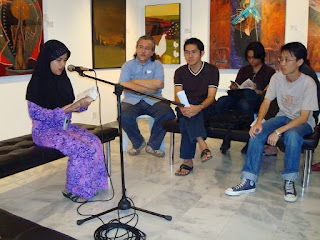 Awang Goneng, of Growing Up in Trengganu fame, was initially asked to read an excerpt from his book but he had other commitments. 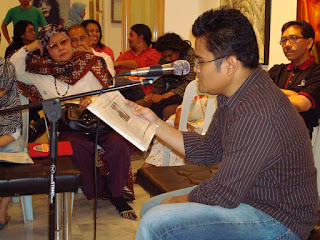 There was a short break with before Haris Zalkapli read two articles he wrote, one in Malay, the other in English. 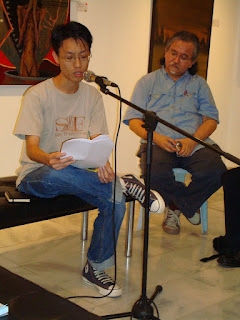 And then it was this handsome young man's turn. He looks like me, sounds like me! Ted Mahsun (cough cough) read a short story entitled Pak Sudin's Bicycle. 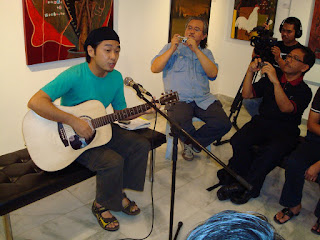 Tan Sei Hon performed two really neat songs, which had the crowd tapping their feet. Actually, no, I don't know. But I did, at least. 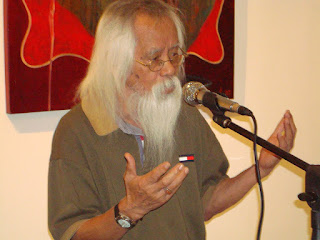 And then it was national laureate Pak Samad's turn at the mic. He took the chance to criticise the decision of the Ministry of Education not to include any works by a Malaysian national laureate. One of the reasons this was done was because such classic works were considered "too hard" for students, to which Pak Samad responded that in his time he had to learn Shakespeare and other English classics; those weren't easy reading either.

I'd have to agree. Reading and studying Salina (for example) wouldn't be as mindcrashing as it is with say, King Lear. Finally, he read a poem from his self-titled anthology of poems. A video of Pak Samad's speech can be found on Firdaus Ariff's blog. 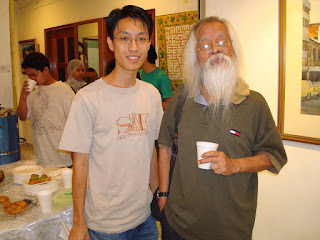 On the whole, a pretty good experience! Also, free food. And the chance to rub shoulders with Pak Samad. As well as other interesting people and bloggers. Awesome.

More nitty gritty in today's Utusan. You'd have to switch on your Malay-reading skills, ya.