February 18, 2008
This month's Kata-Suara event was held right after the launch of "The Unknown" art exhibition at R.A. Fine Arts Gallery in Ampang, so there was quite a spill-over from one event to the other, and that resulted in the small room reserved for the Kata-Suara readings being packed with much more people than last month's event.

The event was kicked off with Usratika, a band consisting of two guitarists and a percussionist. They performed two songs, Bagaikan Si Anak Kecil and Hanya Seorang Musafir.

Check out the video of their performance:

Next up was Razali Endun who read two poems of his and a poem by Usman Awang (I think. I screwed up my notes again.) 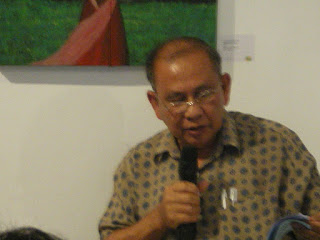 Aisyah Baharuddin read poems by Kahlil Gibran--her "lover" she claimed--translated into Malay. I'm not sure if she was the one who translated it. (Again, bad note-taking on my part.) One was about three frogs, the other was about justice. 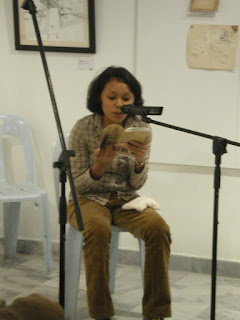 Bernice Chauly came to read her poems from her recently published poetry collection, Book of Sins. 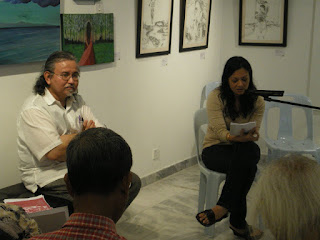 Surprising everyone with a banjo newly brought in from Singapore was Azmyl Yunor, who performed three songs, "Bagai Malang", "Ballad of Mat Som" which was inspired by the Lat-created character, and the very KL-flavoured "Anak Dara". 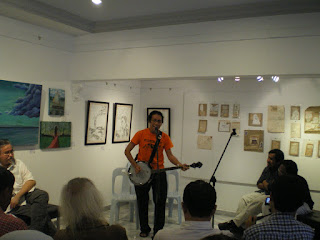 But in the end Pyan Habib stole the show with his unique style of poetry. 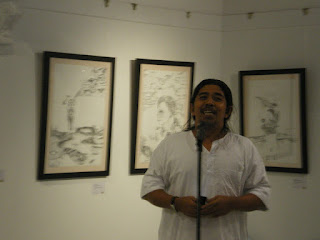 Azman Ismail was scheduled to read but couldn't make it due to an assignment at DBP. Perhaps another time.

Anyways, look! Zedeck, Bernice, Azmyl and Reza in one picture! 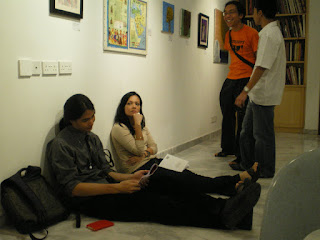