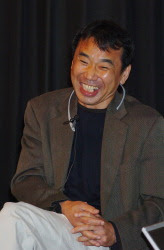 It used to be that Haruki Murakami was very shy with the press, especially the Japanese press. But in recent years that shyness must have cast off a little. It looks like he's in the news every other month now.

While I won't be surprised if he gave a comprehensive interview to a foreign newspaper (it's outside the shores of Japan where he's celebrated as a literary sensation, while he's seen as more of a hack within), it does surprise me that Murakami would give such a long and interesting review to a Japanese paper–the interview spans 5 webpages over 5 days. (Personally I've been hopping with glee with all this Murakami news pouring in!)

I guess times must have changed?

It's a great read, especially if you're a big Murakami fan like me.

Here are the links:
Enjoy!