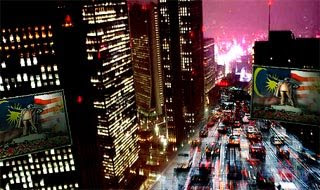 I logged into Malaysiakini this afternoon to see if anything was wrong in the country, and instead of the news I was presented with a nice little science fiction story by Lim Teck Ghee:


It is Merdeka Day 2057. The Supremacist Alliance is in power. Having successfully re-engineered (and renamed) itself several times over, it has the record of being the longest-staying political party in power in the world.


Interviewed over Mal-Jibberish, the sole media agency (all other printed and electronic news media had lost their licences in the great media purge of 2020 or had been swallowed up by the national media Goliath) the Supreme Minister (SM) proclaimed that the Supremacist Alliance looked forward to another hundred years of ruling the country based on its past record of successfully managing the multi-racial society.

And you thought he only dabbled in political science!

Link might be for paid subscribers only. If you're not a paying subscriber to Malaysiakini then allow me to knock you on the head. *knocks reader on head* There.