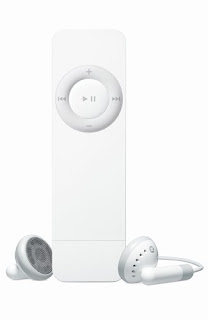 Feeling a little sad. No. Scratch that. A lot sad. My iPod Shuffle just died.

It's a first gen Shuffle so it looks like a stick of gum rather than a silly clip-on. I bought it right after launch and has served me well for the past 3 or so years. I guess it was time. The headphone socket had been having problems recently with the audio dying out on one side of the 'phones, and then switching to the other for no reason at all.

But even then I loved using it as a general-use thumbdrive. When not using it as a music device, just plug it in and it becomes a spare backup drive. Very useful, unlike the 2nd gen clip-on Shuffle, which you have to plug into a dock before you can connect it to a computer.

On the upside! The new shuffle doesn't cost more than RM200 while I bought my old 1GB Shuffle for RM500. (It was right before CNY and my old company had recently given out a bonus). These days you could get a Nano with 8 times the memory AND a screen with that kind of money.