REVIEW: The Hour I First Believed by Wally Lamb. 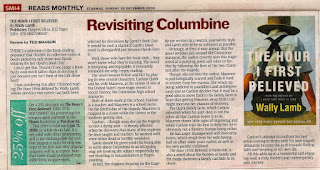 This review was published in The Star on 28th December 2008. 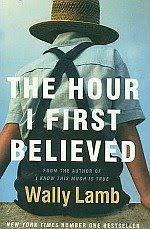 THERE’S a selection of the book-reading populace that thumbs its collective noses at books picked by talk show host Oprah Winfrey for her Oprah’s Book Club.

I don’t get this. Shouldn’t one judge a book by its own merit rather than dismissing it just because one isn’t fond of the talk show host?

by Wally Lamb, whose previous two novels had both been selected for discussion by Oprah’s Book Club. It would be such a shame if Lamb’s latest novel is disregarded just because Oprah likes it!

Well, those who hate her book club ... they won’t know what they’re missing. The novel is intriguing and enjoyable; it constantly reminded me why I enjoy reading.

The novel weaves fiction and fact by placing its two central characters, Caelum Quirk and his wife Maureen, at the centre of one of the United States’ most tragic events in recent history, the Columbine high school massacre.

Both of them work at the school: Caelum is a teacher and Maureen is a school nurse. On the fateful day of the tragedy, Maureen is trapped in a closet while she listens to the students getting shot.

Caelum – though away during the tragedy to visit a dying aunt – is deeply affected when he discovers that many of the students he once taught and teachers he worked with were either dead or terribly wounded.

Lamb should be given credit for being able to write about Columbine in an intriguing way, yet treating the subject respectfully by not resorting to sensationalism or finger-pointing.

In fact, the chapters focusing on the tragedy are written in a neutral, journalistic style and Lamb tries to be as unbiased as possible.

Although, at first, it may appear that the novel revolves just around the Columbine massacre, the author cleverly uses this tragic event as a jumping point and takes us further by following the lives of the two characters after the tragedy.

Though she survives the ordeal, Maureen is psychologically scarred and finds it hard to recover from her trauma. She winds up being addicted to painkillers and antidepressants and so Caelum decides that it may be a good idea to move back to his family farm in hope that getting Maureen away from it all might increase her chances of recovery.

The Quirk family farm, which Caelum inherited when his aunt died, is not the solve-all that Caelum hopes it to be. Maureen shows little signs of improving and while Caelum tries his best to help her, he is obviously not a flawless human being either.

He has anger management and insecurity issues, which result from his wife having had an affair some years earlier, as well as his own painful childhood.

The Hour I First Believed

, it turns out, is also a novel about the burden of family and the many skeletons a family can hide in its closet.

Caelum’s attempt to confront his past while coming to terms with his own tragedy ultimately become the path towards finding faith and meaning in his own life.

All this adds up to a wonderful and engaging read, a truly modern and contemporary epic journey.