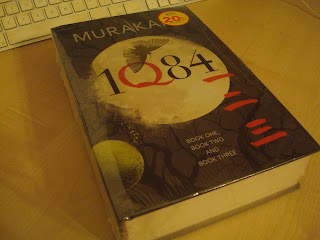 Thing is, as huge a Murakami fan that I am, I wasn't planning on buying it so soon. I felt I had outgrown Murakami and didn't really feel like reading a huge tome, especially if it was a meandering one like Kafka on the Shore. Not that I do not like Kafka. Far from it. It's just that, well, I want to read other stuff too.

But it seems the God of Books has other plans and sent fate to intervene? I was made aware of some excerpts of reviews with statements such as "his best work since Wind-up Bird!" and "the opus that would define his oeuvre!"

I realise this might be hyperbole but come on! I had become intrigued. And then today a colleague said he had it for his Kindle and had already started reading it. He said it was great so far. That was the last straw. I knew I had to read it as well.

So, one trip to Borders... and here I am. I haven't even ripped off the plastic wrapping yet. I am savouring this delight of holding a virgin Murakami book that I know nothing about. (I've been avoiding articles about Murakami for the past year to stay as spoiler-free as possible.)

Rather surprised it contains all three volumes, though. I thought the British edition lacked the third volume and I don't think this is the American edition. Weird.

Anyway, time to write for Nanowrimo and then start reading as my reward for hitting 2000 words!