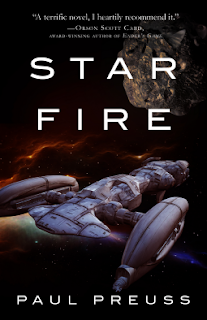 A solar flare causes an accident on a routine mission around the Earth's orbit. This causes astronaut Travis Hill to take extreme measures by leaping out of the craft and into an escape pod, effectively becoming the first astronaut ever to jettison to safety from space and make a reentry back to Earth.

This amazing starting sequence in the novel, Starfire by Paul Preuss, hooked me straight in and kept me turning the pages, wanting to know what would happen the thrilling moment next. Unfortunately, as action-packed as the opening was, the rest of Starfire left me wanting.

Several years after Travis Hill's amazing escape from the solar flare accident and his daring descent back to Earth, he has been deemed unfit to go back to space. But when he hears about an asteroid that makes a near pass to Earth and is heading towards the Sun, he spies an opportunity to get back to space. With NASA launching the brand new spaceship, the titular Starfire, very soon, plans are made to readjust the spaceship's maiden voyage with an ambitious mission to land on the asteroid before it heads into a closed loop near the sun.

The premise of Starfire may remind you a little of the film Armageddon but this novel was first published in 1988, ten years before Bruce Willis and Ben Affleck ever went to space to the sound of Aerosmith. Also, Starfire, being a hard SF novel, likes to think it's a little brainier than Michael Bay's popcorn fare. And truly, the science and realism that permeates the novel is a joy for those who prefer their science fiction leaning towards science more than fiction. It is to the author's credit that all that science and realism does not get in the way of the story and actually enhances it.

Where the author fails is in the characters and the extraordinarily slow pace of the plot. The characters are either forgettable and especially in the main character's case, unlikeable. Travis Hill recalls one of a cowboy from Texas and retains all the negative stereotypes of one -- mainly a misogynistic white male. In fact, the cowboy elements were so strong that half the time I wondered whether I was reading a Louis L'amour western or a scifi opera.

The plot is simple enough, and the author possibly realised that this meant he had to pad his novel so that he could make his wordcount. And so every time things start to get a little exciting, we are thrown into a pointless flashback of a character. The flashbacks were so many to the point of annoyance; I kept wanting to shout at the book, "Get on with it already!"

I really wanted to like this book, I really did. The premise was sound and normally, anything with spaceships in it would get me hot and bothered, but this one left me as cold as a floating rock in space.