Journey of a Nine-Year-Old Short Story. 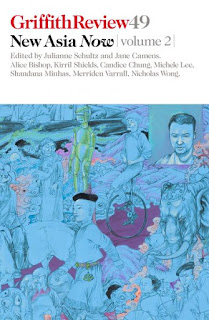 Yesterday, the New Asia Now edition of the Griffith Review went on sale:

Griffith Review 49: New Asia Now showcases outstanding young writers from the countries at the centre of Asia's ongoing transformation. They write about the people and places they know with passion, flair and insight.

All born after 1970, our contributors are cultural agenda setters at home who explore issues of identity and belonging in the new world that is unfolding.

Griffith Review 49: New Asia Now, co-edited by Julianne Schultz and Jane Camens, takes a journey through the region’s diversity, featuring a new generation of literary stars who will shape the way we understand the complexities of culture, politics and modernisation.

The editors received so many good entries they wanted to include that they decided to publish this edition in two volumes -- a print edition and a supplementary e-book entitled, "New Asia Now: Volume 2".

Now, why am I telling you this? Because not only is New Asia Now a great showcase of the modern Asian zeitgeist in writing, but the e-book, New Asia Now: Volume 2, includes a story by yours truly!

Long time readers of this blog (all three of you) may remember nine years ago, at a Readings session run by Sharon Bakar, I read a story I had just written called Ghost in the Garden. This was the first time I presented this story (still a very early draft at this stage) to the public and the response was encouraging. (It was also the first time I had read in public.)

Born in one of Sharon's writing classes back in 2006, the story has been rewritten several times over. Sharon's been instrumental in encouraging me to continue submitting it for publication, even after it was rejected by many publications over the years. (Incidentally, an earlier draft was also rejected for Readings from Readings 2, an anthology of Malaysian writing that was co-edited by Sharon herself along with Bernice Chauly, though my other story, Pak Sudin's Bicycle, managed to sneak its way in.)

Earlier this year, I saw the call for submission from Griffith Review for New Asia Now and told myself, ehhhh okay one last time. I took another look at the story and decided to give it one more round of polishing and rewriting. Then in February I submitted it and promptly forgot about it. That's what you do with a story you've kept for nine years that's been rejected repeatedly. You don't put much hope into it.

Early in April I had an email from the editors telling me I was among two hundred writers long-listed to be included in New Asia Now. I was happy to know that but didn't put to much stock in it. Two hundred? Surely there were a hundred and ninety-nine other more talented writers who had a much better chance at being accepted!

Another month passed and I hadn't heard anything regarding my story. I assumed that my story had been dropped. Suddenly I received an email with suggested edits for my story. They also let me know that while the story might not make it into the print edition, they're going to publish the story in a supplemental edition as an e-book.

And so now, after nine long years, you too can read The Ghost in the Garden, if you get a copy of Griffith Review 49: New Asia Now Volume 2. And of course, you totally want to.

Malaysian author, Chuah Guat Eng, had this to say about The Ghost in the Garden:


"Loved it. You had me expecting a ghost! I also love your writing style."

Oops. That's kind of a spoiler. But I suppose I should say that the story isn't a genre story in case someone expects it to be and finds themselves disappointed that it isn't.