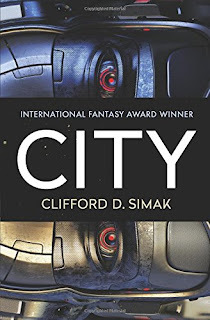 It's always wonderful when you discover a wonderful new author. But this author I've found is hardly new and he is hardly obscure, having won three Hugo awards as well as a Nebula. In 1977 he became the third Grand Master of the SFWA. No, far from obscure, Clifford D. Simak is one of the masters of science fiction who wrote and published his stories during the hallowed Golden Era of SF. And the book that I've discovered by him is the fantastic, far-reaching and truly epic novel, City.

Like many SF novels of that period, City is a novel that is patched together with previously published unconnected short stories, very similar to what Bradbury did with The Martian Chronicles and what Asimov did with I, Robot. What makes City unique--I'd go so far as to say fascinating--are the interstitial "notes" that tie the stories together into one continuous narrative. And these notes are often equally as intriguing as the stories they introduce.

But I'm getting ahead of myself. City tells a legend that has been passed on via oral tradition by intelligent, sentient dogs of the future. The legend consists of eight tales (with a ninth added to the canon in 1974) following the adventures and trials of the Webster family, their dogs and their loyal robot butler, Jenkins. The notes* that tie the stories together are written as academic research essays by dogs who are skeptical that Man ever existed, and they often assume the stories are mere fancy, legends to entertain little pups before they go to sleep.

And indeed, the novel tells of how the Websters had their hand in giving the dogs their sentience, getting Man to leave Earth and ascend to another kind of existence and what happened when the dogs took over as caretakers of the planet. From the perspective of a dog who has never had the chance to meet a man or to witness the wonders of Man's creations such as rockets that fling into space, how else but to take these stories as mere fancy?

The stories are heartfelt and are a great commentary of the human condition. I especially love the story, "Desertion", which tells the story of what happens when a group of human explorers are sent to Jupiter, never to return. It's a great story by itself but it also provides the novel a pivotal moment that changes everything for humanity.

On the whole, a great read by someone who's not mentioned enough by the SFF circles. City is now available in a new edition which not only includes the newer ninth tale but also an essay by his close friend David Nixon. I highly suggest you check it out.