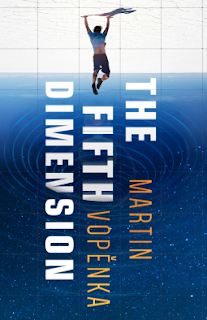 The Fifth Dimension starts out promisingly. A Czech man, Jakub, who built a successful career in construction after the fall of Communism suddenly finds himself broke after his business prospects vanish one by one.

Desperate, he answers a mysterious ad from an equally mysterious organization that promises him US$200,000 if he takes part in an experiment that involves spending a year in solitude out in the mountains of Argentina. He takes with him only one book, Black Holes & Time Warps by Kip Thorne, and so spends his time lost not only in loneliness and paranoia but also in multidimensional physics theories.

Thankfully, the writing (or perhaps the translation offered by Hana Sklenkova) makes it an easy read, and Jakub's often ponderously long monologues about black holes and space and time are actually quite interesting, considering how these are advanced topics which are rarely accessible to a layman.

In the end, I found the reveal of what the fifth dimension of the title actually is to be quite disappointing. The author might have known he'd be questioned for it, and so he has Jakub say this, (probably on his behalf): "I worry that people won't appreciate the simple truthfulness of my basic idea. Precisely because it is that simple."

Simple it may be, but still disappointing. And, like the story, which hinges on a simple concept that doesn't deliver a satisfying payoff, The Fifth Dimension ultimately proves to be a let down.