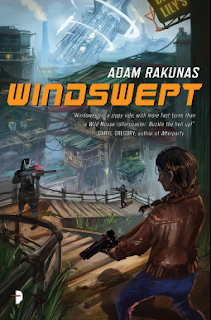 It's very rare for a book to grab my attention on the first page, then proceeds to drag me through a fast-paced, action packed SF romp. Adam Rakunas's Windswept sweeps you through a plot involving labor unions, edge-of-space boondocks, space elevators, and sugarcane byproducts, which of course, includes rum. Lots of rum.

Padma Mehta is a union recruiter grappling on the edge of sanity who only wants to fulfill her recruitment quota so she can retire and buy her own rum distillery. When an opportunity presents itself so that Padma can finally fill her quota, she takes it despite her better judgment.

But instead of the forty people she expected to quit their labor contracts, only five of them come tumbling down the space elevator and one of them happens to be dead. What happens next is a series of increasingly insurmountable problems for Padma to overcome.

Besides the breakneck speed of the prose, I found the witty banter and the often hilarious situations entertaining, making the book very much an enjoyable read. I also found the worldbuilding a lot of fun, with Rakunas borrowing a lot of elements from various Asian cultures and mixing them together to create a cool world. I especially liked that on a far-flung backwater planet that there were "kampongs" and that characters used "chops" to mean company seals or stamps. (Take that, English teacher from my childhood!)

About the only problem I had with it was because it was so fast-paced, I sometimes had trouble picturing what was actually happening during some of the action scenes. I had to take a pause, flip back a few pages and reread them again to fully ground myself in the situation.

Otherwise, the book is irreverent and zany and I heartily recommend picking it up.