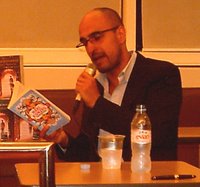 So I went to Hari Kunzru's book reading at Kinokuniya just now at 7.30pm. (After which, I had to go back to the office and is why I'm only posting this up now.) The reading was held in Coffee Club Xpress upstairs. When I arrived, I was a little surprised (but maybe I ought not have to) to see that there was a full audience seated, waiting for Mr. Kunzru.

He gave a superb reading from a chapter in The Transmission, the scene where Guy Swift goes to Dubai to pitch to the rich Arab golf guy. After the reading, there was a Q&A session and the following is what was discussed. (If anybody who was there is reading this, please do tell me if you spot any discrepancies in the comments section, thanks!)

On Dubai:
Someone asked if Hari Kunzru had been to Dubai, and he said yes. He found it so amazingly odd, he felt compelled to put it down in writing.

On Malaysia:
He couldn't really give a proper opinion, because for the last 48 hours, what he's seen of Malaysia has been the insides of conference rooms and his hotel room. The Malaysians he has met though, have been friendly and have taken him to places with great food. Yep, sounds like Malaysia, all right.

On characterisation:
When Hari Kunzru writes about his characters, he admits to not taking real peoples's characters wholesale. He takes bits and pieces from here and there to create someone new. He shared with us a story of a writer he knew, who wrote a story about her close friends and what they did. Her friends recognised themselves in her story, and pretty soon she found herself without much friends. Hari Kunzru's advice: when writing about someone, make sure to make the character unrecognisable to the real person.

On why there's a theme of India in his books:
Hari Kunzru is a mix of English and Indian, so he has extended family on the subcontinent. Though he grew up in England, he feels the connection to India because of his family. While growing up, he says, what he was exposed to India was the image prevalent in the 70s and 80s, of the Indian servant loyally standing in the background while the English man and woman falls in love with each other. This is what he tries to send up in his books. He expected harsh criticism from India as he felt that the Indians would feel a bit more cynical of him, being that he comes from a mixed background and having not grown up there. He shared with us a hilarious anecdote of the time he went to India to promote The Impressionist. They gave him funny looks and didn't really know what to make of him.

Advice for aspiring authors:
Get someone that isn't so cruel to read your book so he can give you comments. And always keep writing. Make sure you finish what you write. Don't be afraid of criticism because once you get on Amazon.com, they're going to be really out to get you!

On where he writes:
He says he prefers writing at home in his study and doesn't really have a special place to go and write. He says that this is because either the place is too beautiful he spends too much time admiring it, he gets distracted by other people or he suddenly realises that he has a books he absolutely must have, else he can't get any writing done so he has to go home.

On a possibility of a short story collection in the future:
He's thinking of one, perhaps after he finishes the novel he's working on right now. Though it might not be old material, it could possibly be new ones. He might also consider just putting it all up on the his website for free, like his current short stories. (If you visit, I recommend Deus Ex Machina.)

On his next novel:
It's going to be totally different from his current books. It's set in 1970s England and has some political elements in it. He says that trying to finish the novel is like having his "teeth pulled out "but he is anxious to find out what people will think of it.

After the Q&A session, there was an autograph session and while I had both my free copies of his books signed, we had a nice, short chat. All in all, he's a really nice person. I think he's my new favourite author! *fanboyism starts here*

If you missed him, Hari Kunzru will be in Borders, The Curve at 7.30pm.

Did anyone else blog about his reading in Kinokuniya? Do tell me and I'll link you up here.