A Treasure Tower of Books. 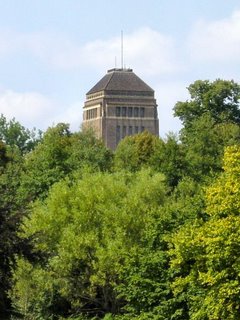 There are a 170,000 books and papers consigned to the Cambridge University's library tower because they were deemed too populist or lowbrow. But a recent look inside has revealed that the material inside are literary gems:

In Cambridge, the main body of history has always been looming above the town in this big Stalinist building of eight or nine storeys [designed by Giles Gilbert Scott of telephone box and Battersea Power Station fame]. It's always had this mass of hidden history inside."

The collection includes popular Victorian and early 20th-century novels with beguiling titles such as Tempted of the Devil, Love Affairs of a Curate and Only a Village Maiden (which, despite the implications, has an entirely innocent content). As the definition of academic in the 19th century was very restricted, it also covers translations of foreign and classical literature and authors not studied at Cambridge.

Ooh! Imagine being able to browse through the stacks of books! And in mint condition! I would never leave the place!