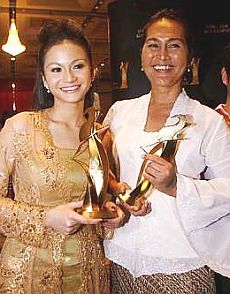 This isn't really what I normally blog about but I am impelled to say something over the uproar over Sharifah Amani's comments about "tainting the culture" at the 19th Malaysian Film Festival. Sharifah Amani is quoted to have said, "Kalau filem cemarkan budaya (if films can taint culture), let's do it more often." Pretty strong words for a 20-year-old lass. And when looked at without context it is indeed very understandable why many people got riled up. But what made her say this in the first place?

Let's go back a few months, back to April 2006, when RTM1 aired a forum where the topic was "Sepet and Gubra – corruptors of Malay culture." A very eyebrow-raising topic indeed, engineered to stir things up. In the forum, Yasmin Ahmad was labelled a "pencemar budaya (culture corruptor)" because her movies did not reflect a "proper" Malay culture, and clearly Sharifah Amani was just responding to the accusations about Yasmin Ahmad and her movies made in the forum. Many people may have forgotten this.

So taking this in context, perhaps what Sharifah Amani simply meant at the Fest was that filmmakers should make more movies that show more than just a single perspective of the Malay culture, such as what Sepet and Gubra attempted. We really shouldn't be taking her literally that filmmakers should go and make movies that "taint culture", as she was just quoting what the speakers in the forum were saying.

In that very same forum, two other very questionable statements were made, yet no one with the authorities really sought to question the people who made these statements. From a post at Yasmin Ahmad's blog:

Film producer: “Malaysia Melayu punya.” (This translates to “This land belongs to the Malays.”)

Journalist: (translated) “How can a good Muslim girl who prays and reads the Koran fall in love with a Chinese infidel?”

If there's anything anyone should be getting upset about, it's these two fascist statements, not what Sharifah Amani said at the Fest.

UPDATE:
I was wondering when Yasmin Ahmad would post about this. And now she has:

To me, she is one of God's greatest gifts for my work, alhamdulillah.

And no matter how much they rant about how "kurang ajar" she was on the night of FFM19, as far as I'm concerned she was nowhere near as kurang ajar as the people who crucified her.

I mean, for goodness' sake, they even cursed her father and mother. Call me old-fashioned, but insulting someone's parents does not figure in my book as decent civil behaviour.

And she's only 20. How old are these people again?