September 05, 2006
Looks like serialising novels is in vogue again. Harper's is in the game by serialising John Robert Lennon's Happyland:

Lennon cut 30,000 words and one character to fit “Happyland” in Harper’s. (The third of four installments appears in the September issue.) Roger Hodge, the editor of Harper’s, said the magazine had been looking to serialize a novel when he heard from a friend of Lennon’s about “Happyland” being dropped by Norton (the novel's original publisher). “It seemed to me to be a perfect novel to serialize,” Hodge said. 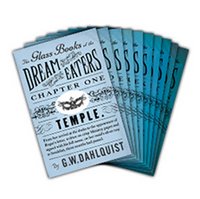 And Penguin's in on it too, though they're taking a different - and in my opinion, more interesting - approach, by releasing Glass Books of the Dream Eaters, a Victorian-era novel about a lady dumped by her fiancé and forced to turn into an adventuress. How it works is, you pay £25, and Penguin will send you an installment, each one a chapter (10 in all), every week, from October to December 2006.

The covers look beautiful, but too bad the story doesn't intrigue me. And the subscription's too steep. I suppose that doesn't cover postage? I think I'll wait till it comes out in traditional paperback form.

Anyways, welcome back to the 19th Century, people! What's old is new again! Makes me want to dig out my Victorian and Edwardian novels and read through them again.