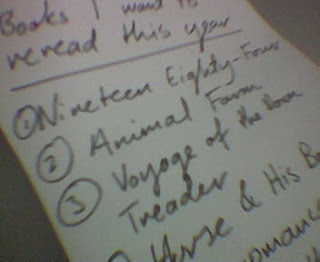 Since some of us are posting up our "to-be-read" 2007 list, I'm gonna go the other way round and post what I will be reading again next year.

The following list is not in any particular order:

1. Nineteen Eighty-Four by George Orwell
Not as influential to me as it was when I was in Form 4, but still relevant. After all, as Malaysians, aren't we all under the gazing eye of Big Brother?

2. Animal Farm by George Orwell
For years I couldn't find this book in bookstores (ah... the days before Kinokuniya KLCC), until my second year in university. I made friends with a guy from the studying management and he was complaining about this "boring" book he had to study for his English class. When I found out it was Animal Farm, I asked if I could borrow the book. He said I could have it and he didn't want to see the damn book ever in his life. He must really hate socialism.

3. Voyage of the Dawn Treader by C.S. Lewis
The best and only worthwhile book in the Narnia series! Even if it does have that insufferable Eustace.

4. A Horse and His Boy by C.S. Lewis
Can't remember what happened in this book as I usually skip this one (and The Last Battle, ugh) when I do a Narnia marathon. Due for a reread then.

5. Neuromancer by William Gibson
Technically not a reread since I've never finished it, but I have read the first half of the book about three times now... Shall attempt another read as I want to know what happens in the end.

6. Heir to the Empire by Timothy Zahn
Read this in Standard 6... I don't remember what happened in it. Ah... the start of the Star Wars revitalisation. Anyone remember the good old days before Episode 1?

10. My Uncle Oswald by Roald Dahl
One of only two adult novels Dahl wrote, and I love it. Uncle Oswald, that cad.

11. Harry Potter and the Half-Blood Prince by J.K. Rowling
Need a refresh before HP7 comes out.

12. A Study in Scarlet by Sir Arthur Conan Doyle
I'm planning a full Sherlock Holmes marathon. This'll be the start.

And one book I do not want to reread... ever:

The Silmarillion by whatsisname