January 23, 2007
I've been friends with George for nearly 4 years now. I can't really believe it's been that long. Doesn't seem so long ago that we first met.

It was early in 2003, probably a January quite like this, when I was with my uncle who took me to Senawang, south of Seremban, to visit a Volkswagen workshop. I was crazy over air-cooled Volkswagens; still am actually. At the workshop lay about a dozen or so old and abandoned Volkswagens. Beetles, Buses, both were there slowly and sadly rusting away. These Volkswagens were no longer usable and were kept around for their parts, or were just left there for lack of another place to abandon an old Beetle. The mechanic, Ah Meng, who worked there said he had some usable ones for sale, but they were at his house. We were welcome to go see those cars if we wanted to.

We decided to check them out. Ah Meng's house was just down the main road in a housing estate about a little more than 5km from his workshop. Ah Meng's house was an end-lot terrace house with a small side road right next to it. On that road, we found three Beetles, all post-68 models, all lined up one after the other, and a lonely Bus (also post-68) that slept in the access road behind the house.

I walked up to the Bus first and patted it. Then I took a good look at each of the Beetles, and the one who got my attention was the one who was nearest to the Bus, the baby blue coloured one.

He didn't reply of course. But there was something in him that I sensed evoked a vague but potential wonderful, something deep and meaningful, that I didn't sense in the Beetles next to him. We were forging a connection-an unbreakable bond between man and cute, little machine.

So it was with a heavy heart that I had to say goodbye to this baby blue Volkswagen. It was getting late. The sun was setting, mosques had already long ago called to come for Maghrib prayers, and it was time to go home. I would never forget that Volkswagen. We were now bonded together for life. 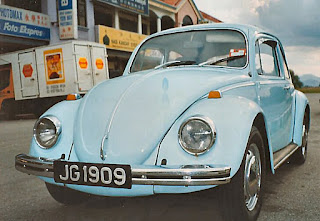