The minute I heard my first love story,
I started looking for you, not knowing
how blind that was.

Lovers don't finally meet somewhere,
they're in each other all along. 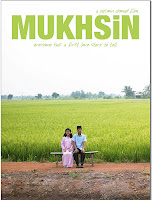 Yasmin Ahmad is probably the only auteur we have who actually has the guts to go against the grain of Malaysian movie-making and yet still be able release a movie successfully on our shores and overseas. With other excellent Malaysian directors being given the middle finger when it comes to releasing their features on local screens, it's a ray of sunlight in our dark, hazy skies to see a movie of pedigree like Mukhsin get released in Malaysian theatres.

I'm relieved Yasmin Ahmad decided to forego the dense intellectualism of Gubra, which I found more of an essay-as-film, rather than a proper story. Nice, but a little too high-brow for my tastes. Call me a philistine but I think I preferred Sepet's simpler love-story. Mukhsin is just that. It's a simple story of a first love between the 12-year-old Mukhsin (Mohd Syafie Naswib) and the 10-year-old Orked (Sharifah Aryana).

The two main actors carry their role with much aplomb, and it's easy to forget that they aren't veteran actors and this happens to be their debut feature. The other actors did well too, though I found Sharifah Aleya as the younger Mak Inom (previously portrayed by Ida Nerina in Sepet and Gubra) as a little off-putting with her constant English-speaking. (Was that intentional?)

The story's much more tighter than Sepet and Gubra, as Yasmin Ahmad does away with the blatant cultural soapboxing she's known for, and opts for a more subtle approach.

In one scene, Kak Yam, the family servant, is making ice cream through a combination of chocolate and milk. Her friend is looking on with surprise as she is used to single-flavoured ice creams. Kak Yam says something to the effect of: "It's better to enjoy a mixed ice cream. There's the sweetness of milk, mixed with the bitterness of chocolate. Two flavours combining. Isn't that more enjoyable?"

Since Yasmin Ahmad's previous films were about racial integration, it's not hard to see what she's getting on to here.

As a movie, Mukhsin's certainly a much better effort than Gubra, Sepet and perhaps even Rabun. I think it definitely deserved all the accolades it got. There's even a bonus for Sepet fans who were unsatisfied with that movie's ending. Talk about fan service!