June 03, 2007
I've been wanting to blog this for ages, but I've never managed to make the scanner work properly... that is till now.

Some years back, my dad was browsing the shelves of NovelHut, Ipoh's best second-hand bookstore, and found a copy of Anthony Burgess's Time for a Tiger. Price? RM2. (That would be approximately USD$0.60 or GBP£0.30). 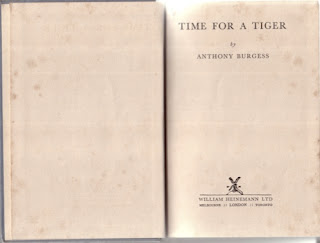 Did I mention it was a hardcover first edition? Here's the dedication page, with the famous dedication written in Jawi. Jawi is the Malay language written in Arab script, a norm early last century. Nowadays, Malay is written in Romanised form. The dedication says: "Kepada sahabat-sahabat saya di Tanah Melayu" which translates into "To my friends in Malaya." On the opposite page, proof this is the first edition. 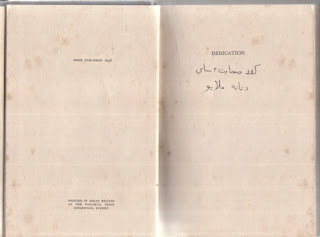 A first edition is probably valuable by itself. But this copy has something extra that makes it even more special--a personal dedication by Burgess himself to a friend: 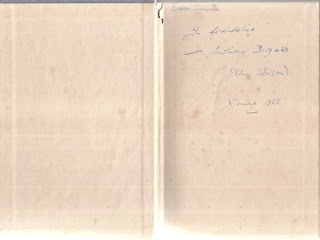 If you can't make the writing out, it says:

I think it is the MOST AWESOME THING EVER to have a book personally signed by a famous writer friend! (John Wilson is Anthony Burgess's real name.)

But a few questions arise:
I don't know the answers but we can speculate. Lilian Sivaram was obviously some one close to Burgess during his days in Kuala Kangsar. Possibly the inspiration for the character of Rosemary in Beds in the East, the third book in the Malayan Trilogy? When Lilian passed away, her books were sold off by her children, who like most Malaysians don't care much about books. And that's how it eventually got into my father's hands (and now, mine).

It probably isn't far away from the truth. In the meantime, this book occupies a very special place in my library!