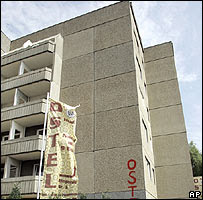 Fancy living it up, commie-style?

Some enterprising capitalist pigs have converted old Corbusier-esque concrete apartment blocks into a hotel where you can relive life as it was in pre-1989 East Germany:

"Ostel" takes its guests back to some time before 1989 - an era of ugly brown and orange wallpaper, spartan furnishings and Politburo portraits.

The hotel, which opened in Berlin in May, offers guests a choice of rooms in the style of the old eastern bloc.

The "Stasi Suite" is more expensive than the budget "Pioneer Camp".

The hotel is a former East German Plattenbauwohnung - the kind of mass-produced concrete apartment building that came to symbolise life in the communist bloc.

In the reception four clocks are another throwback to the "socialist" camp, showing the time in Moscow, Berlin, Havana and Beijing.

And if you ever forget that Big Brother is watching you, the hoteliers have displayed the portraits of former Soviet leaders in what I assume are "strategic places".
By Ted Mahsun at 3:46 pm