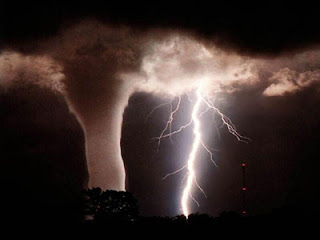 This isn't book related but I'm blogging this to remind me to write a sf novel one day that has this concept--generating tornados on demand and using them to power our cities!

This so-crazy-it-might-just-work idea could only have come from a Caractacus Potts-type of character, and so it has. Louis Michaud, who came up with the concept in his garage in Toronto,

...has spent the past 40 years studying tornados and hurricanes, and is convinced it's possible to engineer and control powerful, full-scale whirlwinds and harness their energy to produce emission-free electricity.

Forget wind farms and their intermittent operation: the future of electricity generation could be tornado power on demand.

Michaud has adapted this process to create what he calls a vortex engine, and has patented the invention in both Canada and the United States. Recently, he formed a company called AVEtec Energy Corp. with an aim to turning this unconventional – and to many, unthinkable – approach to electricity generation into a commercial reality.

The tornados are generated by a conceptual machine called a "Vortex Engine", which would run off waste energy from a power plant and would create 200 megawatts of baseload power. That's enough to power 200,000 homes.

It's an idea totally ripe for a science fictional take on it. In fact, the article even predicts that this will be the case:

It's a scary thought, and a great basis for a movie script, bringing together the don't-mess-with-nature themes of the films Twister and Jurassic Park. One can imagine the back of this DVD case: "A monster man-made tornado loses control and jumps out of its pen, terrorizing a community and ripping a path through dozens of harmless wind and solar farms. Rated R."

What's really interesting to me is this:

If people accept it, the potential is unlimited. [Michaud] says down the road, hundreds of vortex engines could be located in the ocean along the equator, where the warm tropical water would provide an endless source of energy.

Along the equator? That's us! And placing the vortex engines along the equator would even cool the planet, helping to lessen the impact of the Greenhouse Effect.

But I think the real impact of such an application would be summarised thus: