Land Beneath The Wind: Day One. 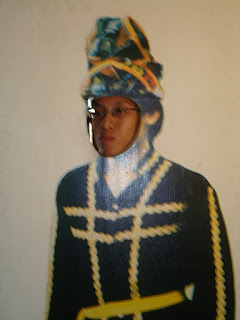 I've always been fascinated by Sabah. I like the fact that as a state, it's history is separate from that of Peninsular Malaysia. Most Malaysians, when they speak of Malaysian history, they're really just referring to the history of Peninsular Malaysia, and even then it's mostly a revisionist version of history, which I think dates from 1970. Malaysian history, in general, really just gives a cursory glance towards Sabah, merely skimming over the details.

It's the same with Sarawak as well. But I dunno. Maybe I'm just seeing this from a West Malaysian point of view. I really have no idea what Sabahans make of Malaysian history. Maybe they just take in stride that Malaysian history is skewed to the Peninsular since that's where the Federal Government is.

I was pondering this because today me and L went to the Sabah State Museum. I learned a lot today, from the Kaamatan Festival to the Dragon of Kinabalu (I didn't know these Sabahans kept a dragon! Very selfish of them not to let us know. A pity the Chinese killed it) Of particular interest to me was the period between the last years of World War II and Sabah's integration into Malaysia, when it was a British Crown Colony and still known as North Borneo. It was particularly interesting to know that North Borneo was actually already given self-governance two weeks before entering Malaysia.

To get to the museum, we walked from the hotel. The weather was fair, and there was a nice breeze so it wasn't tiring, considering that the walk was a little more than three-quarters of an hour away. Unfortunately, it began to rain when we got there so we had to stay at the museum until it stopped. Good thing the museum was quite big. The museum compound also includes an art gallery, a botanical garden and a heritage village. I really liked the heritage village because it reminded me of Melaka's Mini Malaysia. It was a collection of traditional Sabahan houses which I thought was cool. Too bad we were limited with what we could see because of the rain.

So anyway! Now that the history and culture part's done, I guess the next step is to enjoy the seafood! That's something to aim for tomorrow then.