December 30, 2007
This book review was published in The Star's Reads Monthly on 30 December 2007. The print version comes with a 25% discount voucher for the book which can be used at any MPH bookstore and is valid until 13 January 2008. 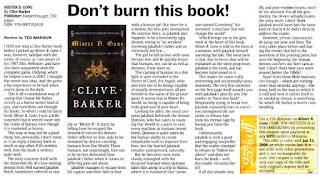 Apart from those little inaccuracies though – which are nothing more than nitpicks, anyway – the story, both in the way in which it is told and how it carries itself to its satisfying climax, is something for which Mr Barker is worth commending.