April 05, 2008
Pretty busy day. I arrived late at the booth, and the surge of schoolkids, parents with family in tow didn't make things easier. But the huge crowd did give give us quite a number of sales. Certainly much better than yesterday.

Met Firdaus Ariff in the morning who was nice enough to drop by and keep me company for a short while.

Later I met Azwan Ismail, who wandered into my booth with Fadli Akiti. They told me about Fadli's new sf book, Saga Horizon--"If you liked Opera Angkasa, you'd like this!" I told them I would certainly check it out. In fact, right after they left the booth, I rushed over to the Alaf 21 booth to get my copy.

When I asked the lady there about it she looked surprised. "How do you know about that book? We just printed it yesterday! Oh, wait you're one of Fadli's friends aren't you?" I said I just heard about it and wanted to buy it. (But the question remains! So how bout it Fadli? Would you be fwens with me?)

I also took the chance to drop by the Al-Ameen booth again, and this time I got to meet Nisah Haron. She graciously signed my copy of Puisi Untuk Esdyzuar while I told her about me listening to her on Radio 24 the previous night while I was driving home from the KLIBF.

When I switched on the radio, I didn't know who was talking; it just sounded like there was an interview with this young girl. But it soon became obvious that this "young girl" was pretty knowledgeable about blogs and blogging. I was like, "who is this person?" When I heard her mentioning Ujana Ilmu and about writing proper Malay while blogging, I knew it was Nisah.

I also met Faisal Tehrani again, who again I unashamedly asked him to sign another book (this time for my wife). We chatted briefly about not having the time to fully go around the fair to have a look around, especially with today's huge crowd.

Tomorrow is Kata-Suara day and I expect my brains might implode if I had any. Hope to see you there?

p/s
Did I tell you my car blew a tyre? It literally blew up! And that is why I was late in today. 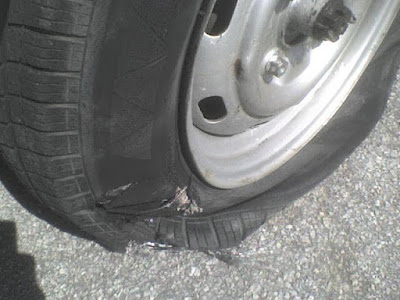