When I came home from work yesterday--yes, I was working on Labour Day; we had an exhibition launch at the gallery--the studio room where I house my computers and book library was like a greenhouse.

This has happened before of course and I've never had problems with my two computers overheating or anything like that before. The only things overheating were the puny humans inside.

I'm lucky the PowerMac has smart internal fans that rev up when they sense the CPU is above a certain temperature, usually 60˚c. With the Windows PC, I wasn't all that concerned about it overheating either because the huge noisy internal fans are blasting away all the time anyway.

And yet a strange thing happened yesterday. I had some extra time on my hands yesterday, so I took it upon myself to install the new SP3 update for Windows XP on the PC. The install went smoothly. And then it asked for a reboot. One reboot later, and Windows booted up into SP3, with no visible issues. Or so I thought.

As I was confirming that SP3 was properly installed, the internal speaker suddenly gave out a siren call and the computer shut itself down.

My first diagnosis was that SP3 fucked up my system. Okay, no biggie, I guess I'd have to reinstall Windows and NOT install SP3 (thanks for nothing Microsoft!). But even when I tried to boot into the Windows Setup CD, the same thing happened. The siren call, then pop, the computer shuts off.

So a few hours later and after many head-scratchings I finally thought of checking the BIOS settings for the PC Health status...and there I saw the CPU temperature was at 90+˚c!!! Yikes. No wonder the computer was shutting down. Something was wrong with the computer's cooling system, so I had to unplug everything and open up the computer to check its innards.

An initial glance saw that all fans were properly working. A more thorough check finally revealed the problem. The CPU heatsink (it was VERY VERY hot, by the way), was not covered, but totally caked and enveloped with dust.

For the benefit of people who don't know what a heatsink is, here's a picture of something similar that's in my PC: 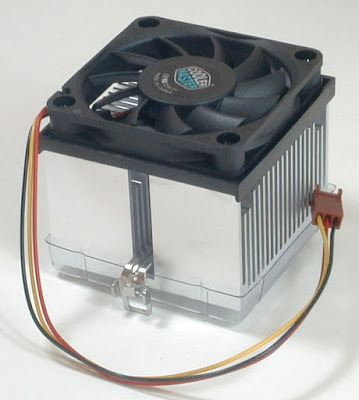 Okay, so you see those grooves in the shiny metal part right? Those are the fins of the heatsink. Air is supposed to travel through those fins to cool the heatsink, which in turn, will cool, the CPU which sits below the heatsink. So like I was saying, my particular heatsink didn't just have dust covering it, the space between the fins were practically filled with dust; there was no space in between them. And when there's no space for the air to move between them, the heatsink doesn't cool, and the CPU doesn't cool either.

I wish I could have taken a picture of the dust. But I was too busy dusting and coughing from the huge amounts of dust clouds being thrown about. I have never seen dust packed in that tight before.

I've cleaned it out now, so the CPU should run okay even during the hottest temperatures in the studio. At least until the next time the heatsink traps that much dust. Which will probably be in the next four years's time.

Right now my main worry is when the same will happen to the PowerMac. It's a little harder disassembling the PowerMac internal fans. Hopefully that won't happen for a while yet at least.

So in the end, it had nothing to do with the SP3 install and so it's not Microsoft's fault for ruining my PC. Hurray!