September 13, 2008
It's Roald Dahl Day again and this year I haven't forgotten! (Thanks to Blogger's scheduled publishing feature.)

So last Roald Dahl Day, I showed you pictures of my autographed first edition copy of Rhyme Stew and the previous year I told you my experience at the book signing. This year let me show you a photo of the book signing. 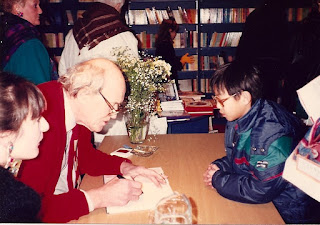 Look at that! My glasses are the same colour as Roald Dahl's!

So this Roald Dahl fellow? What's so awesome about him anyway?

Let me tell you!

Roald Dahl's works appeal to me because there's always a sense of childish craftiness or mischievousness in the writing, as if he's letting the reader in on a secret joke. It's like Roald Dahl was this good-hearted prankster who never really grew up, and he threw all his good ideas for pranks into the books he wrote.

Add to that his silly and funny made-up words, is it any wonder he won many a child's heart?

In a way, he never really did grow up. I remember watching an interview with him on television when I was little, and he said he preferred the company of children rather than adults.

My favourite Dahl book has changed a few times since my childhood. It used to be I loved The BFG, and then later, it was the Willy Wonka books, and then when I was a little older and when I managed to find a copy of My Uncle Oswald after a long search, that became my favourite. But I think nowadays I've settled on his autobiographies, Boy and it's sequel, Going Solo. It's the only two books of his I keep returning to every year.

The reasons I love Boy and Going Solo is that in those two books, you come to realise why exactly he turned out to be the writer he was.

Boy chronicles the years of his life from when he was born until near the end of his school days; his life as a prankster schoolboy makes for very good reading. Going Solo picks up right after Boy, and follows his young adult life, initially as an employee with Shell in East Africa, and then as a fighter pilot for the RAF in the Second World War.

In both books, the events he writes about are made more interesting because its true, but knowing Roald Dahl, I suspect the stories were embellished with extra details to make them more interesting, exciting or even funny.

I was introduced to Roald Dahl when I was first able to read, probably at the age of 6. My father was studying in England then so I was sent to an English school. The teachers encouraged the pupils to read Roald Dahl, and they even read to us aloud his books after classes had finished and before our parents came to take us home. I don't remember the teachers reading anything other than Roald Dahl; it was always a book of his one after another. Probably the first Roald Dahl book a teacher read to me was The Magic Finger.

I'm not sure what impact Roald Dahl had on me, to be honest. This sounds entirely cheesy, but in my childhood, his books were my greatest friends. When you're a kid, adults are always the baddies, and in Dahl's books the children always triumphs against the machinations of the adults. I read and reread the books to comfort myself especially in times when I felt the adults were being unfair to me. Maybe the biggest impact was that Roald Dahl made me a rebel?

I have read (and own) all his children's books but only some of his adults' books. I think I'm missing one adult novel, which is rare and disowned by the author anyway, and his earliest short story book, which I keep meaning to read but having delayed it because his early writings were a bit dry. He hadn't found his voice yet at the time.

There are some differences between his children's and adult books. The first thing you'll notice is that all his children's stories are novels but all his adult ones are short stories, save for one novel, My Uncle Oswald. The second thing you'll notice is that while Dahl maintains his trademark prankster tomfoolery intact in his adult stories, the jokes tend to be much more sinister, and more often than not it involves various naughty bits a person in his or her right mind would never allow a child to read.

This is most evident in My Uncle Oswald, which is about a team of conmen who go around stealing the sperm of famous personalities worldwide, and in Switch Bitch, the book that compiles the short stories he wrote for Playboy Magazine.

The other thing is, the adult short stories always, always have a brilliant twist ending. Roald Dahl is the man who mastered the twist ending. Somehow this talent was never really brought over into his children's books as they concentrate more on telling jokes and evoking a child's sense of wonder.

Which is all right by me.